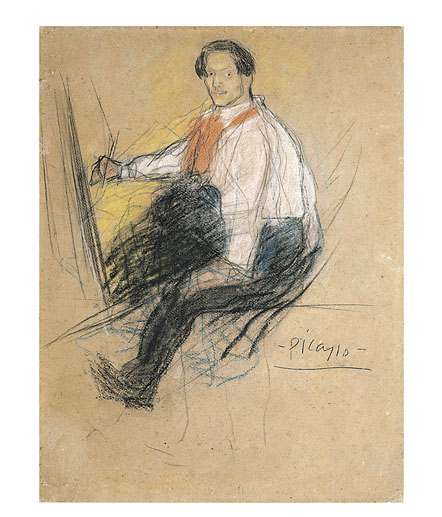 The Picasso Project is a chronological illustrated catalogue of the master's works. Most of the volumes are illustrated in black in white, however those since 2009 also have color plates. Co-directed by Picasso scholar Herschel Chipp until his death, the project reproduces and describes all the paintings, watercolors, drawings, and sculpture as well as the graphics produced from the first extant work in 1889 to 1973. The first volumes appeared 1995, beginning with the post-Cubist work of 1917. The subsequent volumes continue until the artist's final year, 1973. The project then went back to the beginning of Picasso's career, covering the early years in Spain. Until 1995 the catalogue most frequently cited had been Christian Zervos's opus, the first volume of which appeared in 1932. While Zervos and his successor Mila Gagarine added supplements to the original editions as new works by Picasso were documented, no revisions have been made since 1978. The Picasso Project reproduces and describes many works that are not in the Zervos catalogues.

The Picasso Project benefits from its chronological arrangement: grouping the works together by date and place allows the variations, sequences, and developments to be seen. The chronological arrangement also demonstrates how Picasso drew from life and his imagination, with inspiration from other artists ranging from El Greco to Velazquez to Goya to Manet as well as from his contemporaries. Each volume contains an extensive chronology of Picasso's life during the subject period, referencing the illustrations that follow. Large enough for identification and easy to thumb through, the reproductions are placed three or four to a page and are all approximately the same size. The volumes themselves measure 9-1/8 x 12-14 inches (232 x 311mm.).

Each entry includes the work's title in English, French and/or Spanish, and for the early years in Spain, Catalan. The entries include the date, medium and the dimensions. There are concordances to the main standard catalogues including Zervos, the Musée Picasso, Paris and the Museu Picasso, Barcelona. There are references to contemporary catalogues of note, as well as references to selected auctions. The catalogue numbers for each work are easily followed (with the first 4 digits indicating the year), and the running heads provide location and season (e.g., "Paris, Winter, 1920").

For their authoritativeness, organization, and completeness, The Picasso Project catalogues are invaluable to collectors, students, curators and researchers on Picasso and 20th-century art, and should be made available in art schools, comprehensive collections and specialist art book libraries.

For the standard catalogues of the graphic works, The Picasso Project has revised both the catalogues of Georges Bloch and Fernand Mourlot and published the most complete catalogue of the Linocuts in 2012.